Drumming is a vital component of jazz music. If you’re looking to get into this style of music, learning some popular jazz drum songs is a great place to start. This post will share 12 perfect songs for drummers of all skill levels. So, whether you’re just starting or a seasoned pro, there’s something here for you!

“Take Five” is a composition by Paul Desmond written in 5/4 time that has become a jazz standard and one of the world’s most recognized pieces of music.

The piece was originally recorded by the Dave Brubeck Quartet on their album Time Out in 1959, with Joe Morello on drums. “Take Five” has since been covered by many artists, including Brubeck himself, who recorded it in 1961 with the Roger Kellaway Trio.

The original version of “Take Five” was inspired by the work of Duke Ellington and Charlie Parker, and its Latin-tinged melody and laid-back groove make it an excellent choice for beginning jazz musicians. The 5/4 time signature can be challenging to play, but once you get the hang of it, you’ll have a lot of fun playing this tune again and again.

We aren’t leaving Joe Morello yet. Blue Rondo à la Turk was written by Dave Brubeck and initially recorded by the Dave Brubeck Quartet in 1963. The tune is based on the unusual rhythm of Turkish street musicians, consisting of three measures of 2+2+2+3 followed by one measure of 3+3+3. This complex time signature gives the tune a distinctly different feel from other jazz standards.

The original recording features Joe Morello on drums, and his performance is considered one of the album’s highlights. Learning how to play this song on drums is a fun experience for beginners getting into odd time.

Several artists have covered the tune in recent years, including Herbie Hancock, Al Jarreau, and Chick Corea. While it may not be as well-known as some of Brubeck’s other compositions, Blue Rondo à la Turk remains an exciting and enjoyable piece of music.

3) A Night in Tunisia (Art Blakey)

Many believe the best way to enjoy jazz is to see it performed live. There’s something about being in the same room as the musicians, feeling the energy of the music as it’s being created.

And while that’s certainly true of many jazz performances, one jazz recording captures the essence of the genre in a way that few others do: “A Night in Tunisia” by Art Blakey and the Jazz Messengers. For those not in the know, Art Blakey is one of the greatest jazz drummers of all time.

The recording begins with an incredible drum intro by Art Blakey, one of the most influential drummers in jazz history. Then, the rest of the band comes in, and they ride the groove for almost 11 minutes. It’s a masterclass in collective improvisation, and it sounds as fresh today as it was recorded over 60 years ago. So if you’re looking for a starting point in your exploration of jazz drumming, this is it.

Fred is an incredibly fast-paced bop tune from legendary jazz drummer Tony Williams featuring guitarist Allan Holdsworth. The song begins with massive drum hits, followed by a light and quick hi-hat groove that’s incredibly challenging to play. If one piece is the hardest to play on this list, it’s Fred.

Tony Williams was one of the most influential drummers in the history of jazz. A prodigy who began playing professionally at the age of thirteen, Williams quickly developed a unique style that combined the intricate rhythms of bebop with the power and drive of rock and roll.

His explosive performance on Miles Davis’s landmark album Seven Steps to Heaven helped define the sound of modern jazz. His work with groups like the Tony Williams Lifetime and The Great Jazz Trio cemented his reputation as one of his generation’s most innovative and explosive drummers. While his fame may have diminished in recent years, there is no denying Tony Williams’ status as one of the true giants of jazz drums.

Cherokee is a jazz standard that Ray Noble wrote in 1938. The tune was popularized by the recordings of Charlie Barnet and Tommy Dorsey, and many other artists have recorded it over the years.

The melody is based on a pentatonic scale, which gives it a distinctive “Eastern” sound. Cherokee has also been adapted for use in several other genres, including rock, pop, and country.

The song’s popularity is partly due to its catchy melody. It is also one of the few jazz standards that non-jazz fans can easily recognize. Thanks to its broad appeal, Cherokee is sure to remain a fixture in the American musical landscape for many years to come.

Blue Monk is a jazz standard composed by Thelonious Monk. Initially recorded by Art Blakey’s Jazz Messengers in 1954, it’s since been covered by many other artists. The tune is based on the blue notes of the blues scale, and its distinctive melody has made it one of Monk’s best-known compositions.

Blue Monk is often included in jazz education programs as it provides an excellent example of Monk’s unique approach to harmony and rhythm. The tune has also been used in several films and television shows, further cementing its place in popular culture. Whether you’re a die-hard jazz fan or just getting started, Blue Monk is a tune you’re sure to enjoy.

I can remember playing Blue Monk as far back as middle school. It’s ideal for beginner drummers to learn.

If you’re a beginner jazz drummer, there’s one tune you must know: “Autumn Leaves.” This classic standard was first recorded in 1945 and quickly became a jazz repertoire’s mainstay. The tune is written in AABC form and features a catchy melody that’s perfect for soloing.

Drummers will find plenty of opportunities to show off their skills on this tune, with plenty of room for improvisation. So if you’re starting out in jazz, make sure you learn “Autumn Leaves.” It’s a must-know tune for any beginner drummer.

Miles Davis’ “Solar” is a jazz standard that any teenage drummer worth their salt should be able to play. It’s the perfect song for beginner drummers to learn, as it only uses four notes and has a slow, easy-to-follow beat. Plus, it sounds impressive when you nail it.

Chuck Wayne is credited with creating the definitive version of “Solar,” which the Miles Davis Quintet recorded in 1955. If you want to impress your friends at the next gig, make sure you can play “Solar.”

Inner Urge is the title track from the album of the same name by jazz saxophonist Joe Henderson, released in 1966 on Blue Note Records. It was recorded at the Van Gelder Studio in Englewood Cliffs, New Jersey, and features drummer Elvin Jones.

The album has been well-received by critics, with many calling it one of Henderson’s best albums. AllMusic awarded the album five stars, with reviewer Scott Yanow writing, “Inner Urge is one of Joe Henderson’s finest albums… The soulful but swinging results are consistently rewarding.”

The Penguin Guide to Jazz awarded the album four stars, calling it a “powerful set” and praising Henderson’s “beautiful playing.” In a 2012 retrospective review for BBC Music, John Fordham called the album “a key LP of the mid-1960s Blue Note era”. This is an excellent example of Elvin Jones’ work and should not be missed by fans of jazz drumming.

Windows may seem an unlikely subject for jazz composition, but Chick Corea’s “Windows” is a well-known jazz standard. The tune is perfect for intermediate jazz tune for drummers to learn.

The original recording features the legendary Louis Bellson on drums. Windows is based on the chord changes to “My Romance,” a well-known jazz standard. Corea later recorded the tune with Haynes on his album “Circling In” and “Now He Sings, Now He Sobs.”

Charlie Parker was one of the most popular and influential jazz musicians of the 20th century. His composition “Ornithology” is one of the most frequently performed bebop tunes. The piece was originally recorded by Parker in 1946 with Roy Porter on drums.

Porter’s drumming is an integral part of the composition, and his solo on the tune is considered one of the best in jazz history. Parker’s recording of “Ornithology” with Porter on drums is a classic example of bebop, and it continues to be a favorite among jazz fans.

Stablemates is an advanced jazz tune that Benny Golson wrote in 1955. It is an excellent tune for drummers to learn because it features a lot of offbeat figures and even has a jazz rumba section. The A section is 14 bars long (10 bars swing and 4 bars Latin), and an 8 bar B section bridge.

Pianist George Colligan once said, “Stablemates” can be revealing for a drummer.” It’s very easy to get lost in the song’s form while soloing over the form.

Learning Stablemates is an excellent way for drummers to improve their skills and show off their knowledge of jazz when the song is called on stage.

Now that we’ve shared our six favorite jazz drum songs, it’s your turn. So grab your drumsticks and practice along to these tunes. We guarantee you’ll be impressing your friends and family in no time! But don’t stop there – leave a comment below letting us know which song is your favorite, or share a video of you playing one of the tunes from this list. 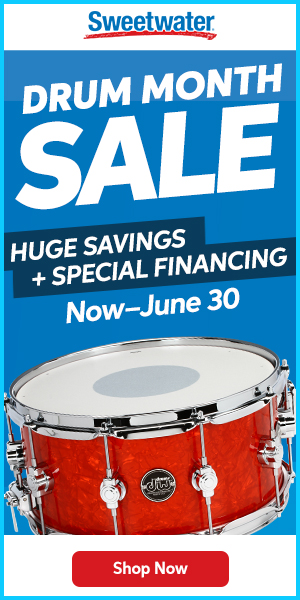