Black Friday and Cyber Monday events for 2020 are quickly arriving! Being that we’re getting close to the end of the year, it’s one of the best times to stock up gifts, drum heads, dampeners, and other accessories.

Be sure to bookmark this page, as I’ll be posting every great drum deal I can find as I scour the internet.

Note — because some of the retailers below change prices frequently, I can’t be certain that every deal is exact. If I made a mistake below, I apologize.

Below I have listed varying retailers and a breakdown of all their current deals. Here’s some of the places to check:

Sweetwater’s Black Friday sale is happening now through November 28, though I’m willing to bet they will honor many sales and deals through Christmas.

Let’s be honest — Sweetwater is by far the best instrument retailer in the US, hands down. The customer service is incredible and the financing is unbeatable.

Some of the deals are also exclusive to Sweetwater and aren’t found anywhere else.

View All Deals at Sweetwater

Here’s some of the current deals at Sweetwater:

View All Deals at Sweetwater

Who could forget the biggest e-commerce powerhouse, Amazon?

Amazon’s Black Friday deals run November 28-30. Cyber Monday is December 2. While it’s not always the best for musical instruments, I have gotten some good steals in the past, especially under Lightning Deals.

Separate of Black Friday, I recently scored an awesome Lightning Deal on my GVM Motorized Slider that I use for drumming videos.

View All Deals at Amazon

If you’re signed up for Guitar Center’s physical mailing list, you should have gotten a flyer in the mail today.

That said, Guitar Center is now running December Deals through the 24th.

The selection seems much more limited, at least as of today.

View All Deals at Guitar Center

Where Can I find Christmas and Holiday Deals on Drums and Percussion?

There are a plethora of retailers out there, and it’s best to check them all.

Sweetwater, for example, has Dealzone, which they regularly update with new deals. As of publishing this piece, there are a total of 1,048 drum deals listed on the Dealzone.

Guitar Center is another fantastic option, as they usually lead the charge with the best deals in-store.

Musician’s Friend is famous for their “Stupid Deal of the Day,” so I’d look there first. A new deal arrives each day at 5 AM PT.

My Predictions for This Year’s Drum Deals During the Holidays

I may be entirely off, but these are my predictions for this year’s holiday shopping season.

More and more drummers seem to fancy the newer colored drum heads sold from Remo (Colortone) and Evans. I predict a big sale on these heads exclusively — seems they’re trying to push these harder.

The Colortone heads from Remo initially introduced in 2018 are a big winner with drummers like Gerald Heyward, who’s kit you see here below.

Electric drum kits always are a massive hit during the holidays. One, they’re far less noisy for parents to deal with, and kids love new toys, especially if they’re drummers.

In the past, Alesis has offered insane deals on electric kits, so I wouldn’t be surprised if the Turbo Mesh, Surge Mesh, and Strike kits are on sale for Black Friday and Cyber Monday.

I’m hoping that Roland will jump in for the sales weekend, as they’re kits are so incredible, but also so expensive. It would be nice to see some price cuts on the TD-25 KV.

Being that practice pads are an accessory, I have no doubt they will be on sale for Black Friday and Cyber Monday. During Prime Day 2019, Evans ran a special on their RealFeel single-sided practice pad.

Drumeo’s pad should be a hit this year with kids, along with Movement Drum Co’s 4-in-one practice pad.

Black Friday Deals on Drums and Percussion from Past Years

Last year, all the significant retailers offered great deals on drums and percussion.

The five-piece Tama Superstar Custom Maple shell pack sold for $579.99. Vic Firth American Classic Hickory 5A and 5B four-packs were on sale for $20.

PDP’s five-piece Encore series kit sold for $299.99, and for all the junior players out there, SPL’s Lil’ Kicker 3-piece kit sold for $99.99. Synthetic Junior Djembes were also on sale for $25, along with LP Aspire Cajóns for $99.

I’m willing to bet most of these will be on sale again, due to their popularity.

If you want the best bang for your buck on gear, it’s best to shop and stock up during this weekend.

Save your money now and forget about that shiny new cymbal until you see what deals are available.

That expensive DW Collector’s Series snare drum you’ve been eying up might drop in price for the weekend.

If you’re unsure about which instrument to choose, be sure to check our expert buying guides before Black Friday and Cyber Monday. 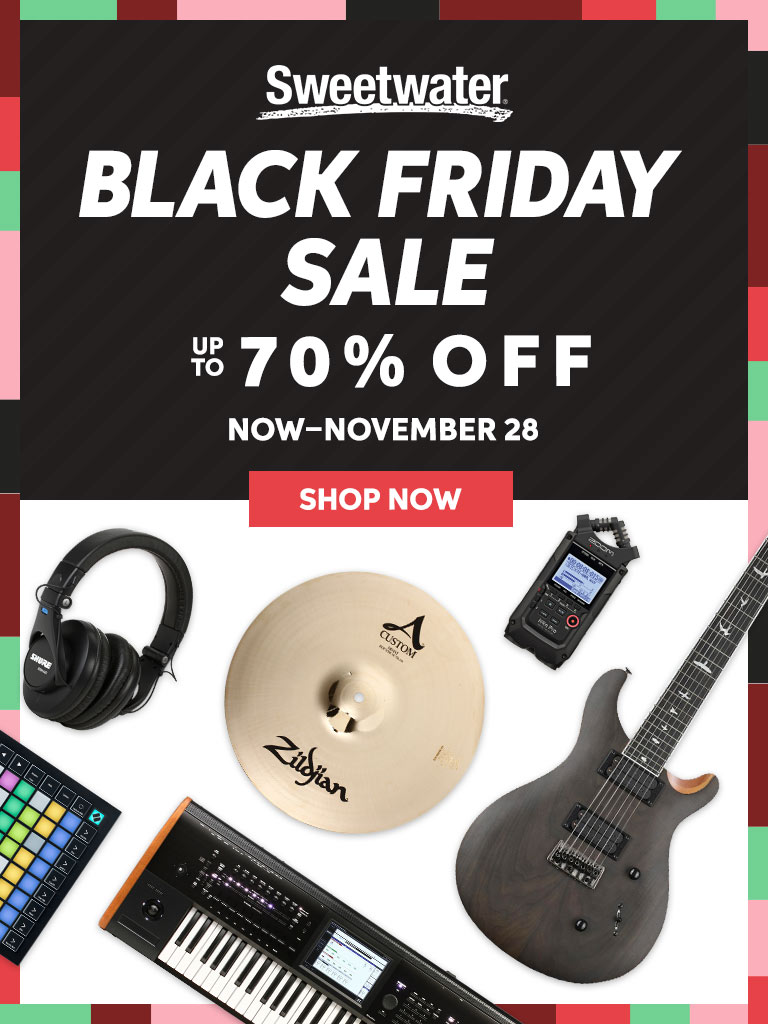 Hey. My name is Nick Cesarz and I’m the founder of Drumming Review, one of the web’s most loved drumming blogs with over 100,000 readers a month.

I’ve been playing for twenty-plus years. I’ve been obsessed with drums and percussion (especially all the gear) since day one of playing.